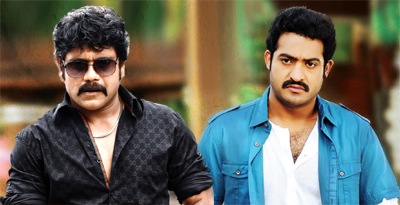 As we all know, Nagarjuna and Jr NTR share great rapport which was quite evident in the recent episode of Nag’s popular TV show MEK as well.Tarak even addresses Nagarjuna as Babai.However a section of Jr NTR’s hardcore fans is not happy with Nagarjuna’s recent comments finding them indirectly referring to Nannaku Prematho collections.
Going into the details, talking about Soggade Chinni Nayana collecting Rs 50 Crores recently, Nagarjuna remarked that a low budget film collecting more than Rs 50 Cr collections is considered to be a blockbuster but not a film made with Rs 50 Cr budget.
These comments have apparently not gone well with some Tarak fans who seriously found it inappropriate from a senior hero like Nagarjuna.Anyhow both the films came this Sankrathi season and entertained us with unique content.
2016-02-26
Telugu BOX Office
Previous: Huge set erected for Baahubali 2
Next: Rashmi Gautam hot Video Song: Nee Sontham (Guntur Talkies)