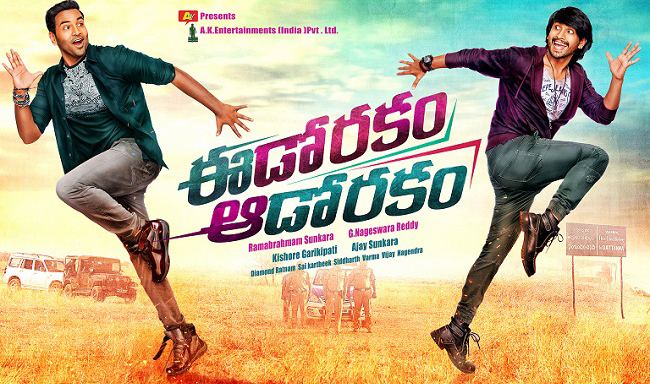 Manchu Vishnu and Raj Tarun have teamed up for a film, directed by G.Nageswara Reddy of ‘Dhenikaina Ready’ fame. This film is titled “Eedo Rakam Aado Rakam” and the first look poster has been released. The title is interesting and as it suggests, the film is going to be very entertaining.
Sonarika of ‘Jadoogadu’ fame is playing the female lead opposite Vishnu and Raj Tarun romances Heebah Patel of ‘Kumari 21F’ fame.Rajendra Prasad is playing a key role in this movie. Sai Kartheek is composing music. This film will hit the screens in April.
Ramabrahmam Sunkara is producing this movie under A.K.Entertainments India Pvt.Ltd banner and ATV is presenting it.
2016-03-22
Telugu BOX Office
Previous: Audio launch date confirmed for Mega hero’s next?
Next: Interesting title for Sunil’s next