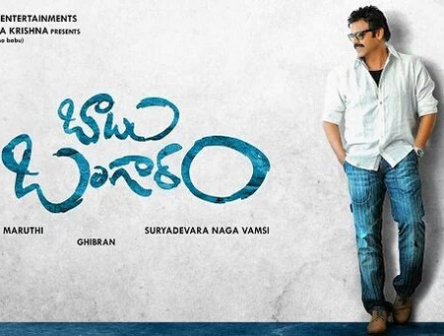 Victory Venkatesh is back to the pace again after Gopala Gopala with Maruthi directorial venture Babu Bangaram. The shooting of the movie is going on at a brisk pace.
From the past few days, there are many speculations about Venkatesh’s look in the film. However, now all the speculations are cleared with this first look. Seen here in the above pic, Venkatesh is looking in a simple yet stylish avatar. It looks like the film is completely a family entertainer.
Venaktesh’s lucky mascot Nayantara is teaming up with him for the third time after Lakshmi and Tulasi. The expectations on the film are quite high as both Maruthi and Venakesth have a good reputation of delivering entertaining subjects  and family emotions.
The movie also features Brahmanandam, Brahmaji, Vennala Kishore in the supporting roles. The film is being produced by urya Devara Naga Vamsi,  and the editing works will be managed by S. B. Uddhav. Babu Bangaram is slated to hit the screens in June.
2016-04-06
Telugu BOX Office
Previous: Wrong speculations about Oopiri remake
Next: Choreographer turns producer for Milky beauty’s next